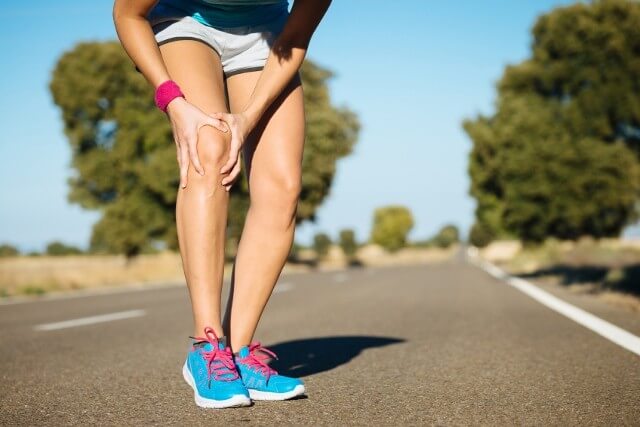 
Patella tendinopathy is a common condition treated at Physio Tullamore that affects athletes in a wide range of sports but is particularly associated with explosive jumping. The prevalence is reported to be around 40-50% amongst elite volleyball players. The natural history of the condition is that of chronic pain and reduced function. This can severely limit or end an athletic career. Up to one third of patients will have significant pain and limitation at 6 months following the onset of symptoms and for the majority some level of symptoms will persist for many years.

Anatomy of the Patella Tendon?

The word tendinopathy basically refers to a degenerative tendon. What happens is in the early stages the tendon becomes sensitive to load from jumping or running, and if left untreated can progress into a chain reaction of changes to the collagen matrix (or makeup) of the tendon until it becomes degenerative. Some of you may have previously heard the term patella ‘tendinitis’ which is now obsolete as many studies show the absence of inflammatory cells within the tendon itself. (We have a seperate blog on tendon pain for further information).

There are 3 stages of a tendinopathy:

It should be noted that pathological changes in the tendon are not easily reversible: once in the degenerative stage, the reversal of this process is difficult! This is because once in the degenerative stage the collagen matrix is so disrupted & unorganised; potentially leaving it prone to rupture. The ‘tipping point’ that turns the tendon into a degenerative state is when “neovascularisation” is seen on a doppler ultrasound scan, this is where there is small blood vessels growing into the tendon itself. A normal healthy tendon should be avascular (no blood vessels).

At Physio Tullamore we use the most evidence based techniques to treat Patella Tendinopathy, these include Shockwave Therapy along with strengthening exercises.

Musculoskeletal extracorporeal shockwave therapy (ESWT) involves the use of low, medium and high energy focused or non-focused (radial) sound waves that have been shown to have a therapeutic value for certain orthopaedic conditions. Shockwave Therapy in patella tendinopathy ‘is a safe and promising treatment’ was the conclusion reached by Leeuwen et al in a review of the literature which appeared in the BJSM last year (BJSM 2009;43:163–8). 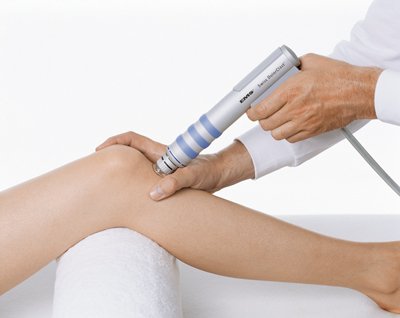 There appears to be two current schools of thought in terms of strengthening, both are outlined below & take 12-weeks to complete.

Long periods of unloading are not good (the tendon likes load). Thus – just resting will not cure your tendon!! On average – a patient presenting with a painful persistent PT for the first time may take 3-6 months to fully recover. If it is a longstanding injury it will likely take a good 6-12 months to return to sport pain free without recurrence. Below are the examples of a research-based strengthening programme for a patellar tendinopathy. It is advised that you have your knee assessed before beginning this strengthening as the stage of your tendinopathy needs to be determined first, plus also any faulty movement patterns & instability (that may have contributed to the injury) also need to be addressed!

Load should be increased incrementally using a loaded backpack or holding a dumbbell.

Mild pain during exercises acceptable, but pain & discomfort was not to increase following cessation of training. 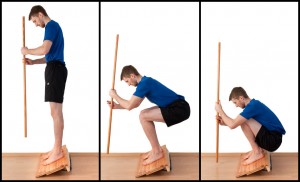 3 sessions per week only, ideally 1x session is supervised by physio.

Patients to complete 4 sets in each exercise with a 2-3min rest between sets.

Spend 3-secs completing each of the concentric + eccentric phases (ie. 6-secs per repetition).

Pain during exercise acceptable, but pain & discomfort not to increase following cessation of training.

The amount of repetitions/load varies throughout the 12-week programme: