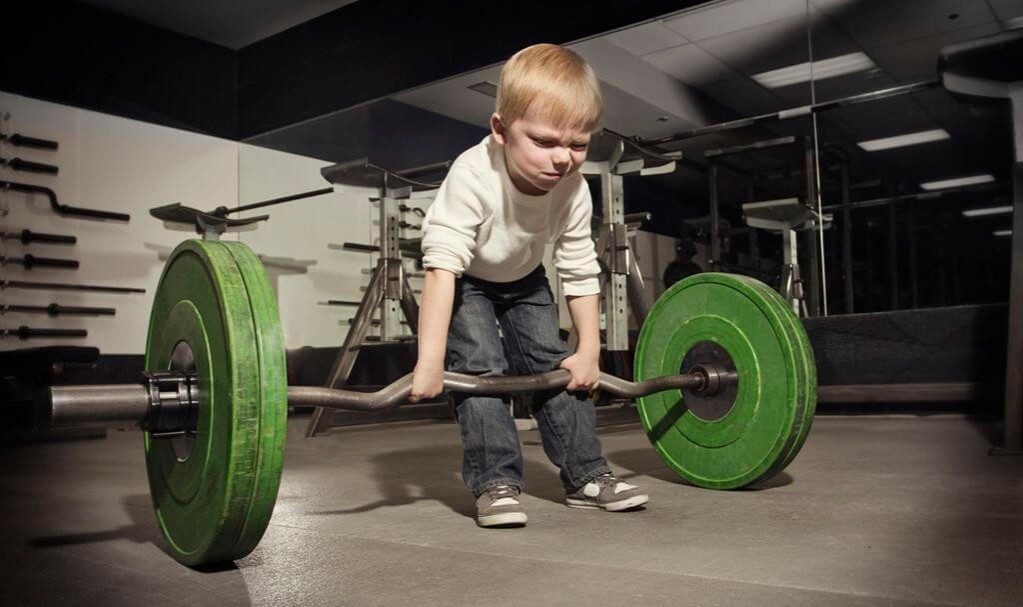 Should kids lift weights? Yes – and it doesn’t stunt their growth (By Stuart Marsh)

From PE teachers to junior sport coaches and concerned mums and dads, nobody wants their kid lifting weights.

The reason are many and varied, and usually focus on stunted growth, warped body image and the general perception that lifting weights is a pretty good way to get injured. But are we all wrong?

It turns out that yes – we are – and the experts are saying that the earlier kids start lifting weights, the better.

“The idea that weight lifting stunts the growth of kids is a myth,” says Marcus Dripps, president of the Australian Physiotherapy Association and CEO of Corio Bay Health Group.

“Any kind of activity that gets kids moving is good – remember childhood obesity is on the rise, and we need Aussie kids to be exercising more and lifting weights counts as part of that.”

Dr Jordan Smith, a lecturer in Physical Education from the University of Newcastle, says that the taboo around having adolescents lift weights is one that’s been hard to break here in Australia, especially because it’s not founded in any research.

“Yes, it’s definitely a myth that kids shouldn’t be doing some kind of strength training and a long-held one too,” says Smith.

“Frankly there is no scientific evidence that sensible resistance training stunts growth, injures children or results in reduced height.”

Weight lifting or resistance training? The difference you need to know

For many parents, the first image that springs to mind when they think of kids lifting weights is that their child will suddenly turn into a miniature bodybuilder, obsessed with adding inches to their arms and calves.

But in reality, the type of weight lifting kid should be doing is far more relaxed, and closer to a standard PE lesson than you might realise.

“It’s really important to distinguish between weight lifting and resistance training. Weight lifting commonly refers to the organised Olympic sport, and involves maximal loads during the snatch and the clean and jerk,” says Smith, who’s also a trained PE teacher himself.

“Resistance training on the other hand can include all manner of strengthening exercises including pushups, squats and more advanced techniques with weighted movements. It’s all about matching the appropriate level and technique with a child’s experience.”

It’s a sentiment that Dripps echoes, reassuring parents that their son or daughter won’t be training like a professional bodybuilder the first time they set foot in the gym.

“To have a nuanced understanding of kids lifting weights, it’s important to remember that not all workouts are created equal,” says Dripps.

“What may be one person’s idea of lifting weights, like exercising with a pink 2kg dumbbell, could be radically different to someone else’s, like deadlifting hundreds of kilos.”

Does weight lifting damage the growth plates of children?

The primary concern of parents is that strenuous weight lifting puts unnecessary stress on the joints and bones of growing children, thus stunting their growth. As the myth goes, weightlifting causes a child’s growth plates to close – but this couldn’t be further from the truth.

“However it’s important to remember this takes a considerable amount of force, and unless a really bad injury is sustained in the weight room, this wouldn’t really happen.”

For Smith, who recently wrote a piece that specifically tackled the injury rates of young children and resistance training, supervised weight lifting is safer than soccer, netball and even football.

“In terms of injury rates, resistance training has considerably lower risk of injury when compared to organised sports (contact and non-contact) and free play.”

The exercise program must be specific to children

Both experts warn that despite the overwhelming benefits of resistance training for children, a workout program for adolescents mustn’t be taken lightly and should always take place under supervision to ensure proper technique.

“A kids weightlifting program should focus on correct technique and form at all times, and not on the sheer kilos of weight being lifted. It must be performed safely,” says Dripps.

Smith believes that when a resistance training program is performed sensibly and under supervision, the risk is extremely minimal.

“The analogy I like to use is to think about resistance training like learning to swim. Simply throwing a child into big surf at the beach is incredibly dangerous – but if you introduce them to the water in a controlled and supervised environment, it’s not dangerous at all,” says Smith.

“Resistance training is much the same – children simply need to be shown the proper form and practise it over and over.”

The benefits are enormous

So you now know that lifting weights won’t turn your kid into a hulking man-child, stunt their growth or injure their ligaments – so what does it do?

“There’s an enormous amount of benefits in having children participate in resistance training,” says Smith.

“Just some of these include enhanced skeletal health, reduced risk of cardiovascular disease, better body composition and even empowering psychological benefits where kids feel better about their physical abilities.”

“I truly believe that in 50 years’ time we may find ourselves staring down the barrel of an osteoporosis endemic because our kids simply aren’t moving enough – whether that’s in the gym or out on the sporting field.”

Handing your kid a gym membership and Arnold’s encyclopaedia of exercises is probably not the best way to start off their lifting career, so if you’re worried about the right way to go about it, follow Dripp’s four time-honoured steps.

“If you’re interested in having a young athlete (say 10-12 years old) lift weights, it’s important to go about it in the right way,” says Dripp.

1. Think about the reason why you are having them doing a weightlifting program.

3. Start extremely light and progress slowly – ligaments take far longer to catch up than muscles do.

4. Appropriate form and technique must be used at all times – this is not a time to focus on lifting as much weight as possible.

At Physio Tullamore we offer a movement screening service where we video children’s movements then breakdown their poor movement patterns. From this we aim at improving the movement patterns with simple exercises. The example below shows poor jumping mechanics by a young girl – this type of pattern would be very common with ACL injury.

For more information contact the clinic Physio Tullamore on 0579329111